But you always manage to find me a million more. In the passages I read, through the plots you carry, between the shelves of my favorite bookstore.

There’s a bit of you in every room of my house, perhaps to remind me to pick you up whenever I’m happy, angry, sad or sore.
Because you don’t complain, you don’t demand, you don’t judge or wash me ashore.

You’re the reason for the pink in my cheeks,
for the shine in my eyes, for my not-so-subtle rebellious streaks.
When I’m confused and lost and wandering downcast, you help me separate the grain from the chaff,
You make me smile, you effortlessly push me to throw my head back and laugh.

You help me deal with heartbreaks in style,
You make my mundane Monday mornings worthwhile,
You’re funny, caring, understanding and intense,
You help me heal, you help me mend, you’re my strength, with you there’s absolutely no pretence.

You’re my first love and you will probably be the last,
For you don’t care about who I am, or what I was,
You don’t think I’m a disappointment, a letdown,
You don’t give up on me, you always remember to stick around,
You hold me steady when everything else turns askew,
There’s nowhere in the world that I would rather be, without you.

Can’t believe 2018 is coming to an end. Well here’s wishing a phenomenal 2019. Here’s to hope, love, light and laughter!

When I’m drowning in an ocean of nothingness, when despair begins closing in, like quicksand,
All I seek, is a hand
to hold, to pull me forward, to lift me up from the tatters,
to calm down my jitters,
So, when I’m dreary and can fight no more,
When there’s nobody and nothing left, to implore,
When every last speck in the universe pushes me to give up, to let go,
I see light, I see reason to stay, I see, hope.

The first tennis match I watched, was the 2006 Wimbledon final between you and Nadal. I was instantly captivated by the grace you brought into the game, by your flawless forehand serves, by how beautifully you defended the title.

Cut to the 2008 final, I cried with you when you lost. Because, it just didn’t seem a possibility to me.

Four summers later, people began to write you off. They began to put you on the back burner. But you came back stronger, you showed them that age, is just a number. You made the world run short of superlatives when you clinched your 20th grandslam this year, at 36.

I want to write about you, but words fail me. My dictionary, is empty. Because, there’d be nothing new in anything that I’d inscribe that the world already hasn’t.

You know the kind of joy that envelops the heart?
The kind that makes one want to fly high into the sky?
I find that everytime I see you win.

You give us reason to believe. To stay undaunted. To keep going. You prove time and again, that pitfalls don’t deter a persevering heart, that, it’s okay to be fallible, to be vulnerable, to be human.

Immortals like you, can never be written off. Because, you write history. The kind that’ll be preserved for inspiration and pride.

Tennis, to me, will always be only about watching you play.

You collect thoughts that melt into a pool of nothingness,
Whisk them into a song that lilts in effervescence
To the tune of the voices muffled inside my head,
Gently tucking with it, a million emotions that lie beneath, unexpressed,

You breathe life into the shadows that lurk in a corner of my brain,
Bringing to light an identity I’d choose to curtain,

You give shape, to the hesitation crawling under my skin,
To the heart that’s enveloped in insurmountable chagrin,

You diffuse strength and warmth and hope into my spine,
Colouring my sky with fairy dust and rainbows and stellar sunshine,

Thank you, April, for stringing my words into poetry,
For magnanimously containing my profound insanity.

You come into the world anticipating sweet nothings, but before you know it, you are marred by expectations aplenty –

From your parents, from your cousins, from almost everyone short of the Prime Minister of the country,

You are expected to become the role model the world is yet to see,
One mistake, and you are paraded through the streets to show your siblings what they shouldn’t grow up to be,

Your mischief is looked down upon; you don’t get any sympathy,
You are required to be strong, your shoulders can’t be weighed down by responsibility,

You are envisioned to be an example par excellence, for, in the eyes of the world you are a human that’s been chiseled to perfection,

You can’t break any rule in the book, because hey, you are trained to be looked up to as an epitome of goodness that needs no introspection,

There’s more – you test the waters of the tempestuous seas, you clear the boulders that lie in your wake –
Just so, for the ones that come after you, the ensuing road becomes a piece of cake,

I could go on and on, for the struggle here is real,
Being a firstborn is, trust me, one true ordeal.

A friend once asked me in jest – if I’d like to peek into the future or relive my past,
I jumped at the question and chose the latter, because there’s so much I’d want to go back and change;
I know not what the future holds in store, I’d rather let the suspense remain,
But there’s so much regret I carry in my heart, there’s so much of the past crowding my present, clotting my brain, not letting me breathe that, I’m reminded –

Of the ruptured conversations, of the punctured silences, of the unfinished sentences,
Of the hasty decisions, of the empty spaces, of the moments of incomprehensible agony,

Of the chaos; Of how often I drowned in them, Of how they’ve become an inseparable part of my identity now,

I’m reminded of my failures, of how easily they still manage to trace their way back into my dwindling solitude –

A gush of air, smelling of salt and the sea flurries into my brain,
And I’m gently reminded of those tiny moments of inexplicable joy I’d give anything, to relive again.

The questions will keep coming, no matter how old you grow, no matter where in the world you are, no matter what you choose to do,
They’ll keep churning out fear in the pit of your stomach, pushing you to doubt your reasons to pursue what your heart tells you to,

You might set tongues wagging for your persisting eccentricity, for the wind beneath your wings,
You might invite opinions grainy with resentment, rustic with envy, opinions that glare at your shortcomings,

You might be laughed upon for the choices you make, you might not be looked up at,
You might be coerced into changing the path you choose to tread,

The dreams you give your all to realise, might even take an eternity to see the light of the day,

But don’t give up just yet, because in the end, it is all going to be okay!

A bit about me… 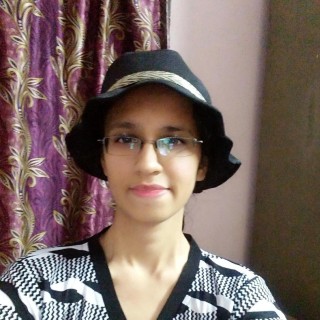 I hoard books for a living. And read them too, when I am not sleeping. I express what I think, so my unheard feelings don't sink. I like to sing when I walk, to keep shades grey, at bay. I speak like a dork, but I don't want to drive anyone away. I write what's real, and nothing fake, so visit my blog whenever you need a break ;)

What I Write About…